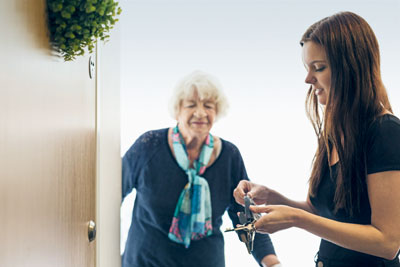 The Ab doorbell was one of the first ideas initiated by Sparklab, the innovation lab launched by NN Non-life in the Netherlands. It is part of the overall Ab concept by NN Non-life, a burglary prevention service that includes advice on burglary prevention, tips and alerts, additional burglary coverage. The doorbell itself allows real-time monitoring of your home via the use of sensors and an app installed with the doorbell.

From concept to reality, the AB doorbell has provided a prime journey in innovation for all involved.

Focusing on solving a specific problem

Ab originated from the idea that the ‘internet of things’ should be leveraged and used as inspiration for innovating our own products and services. After some consideration, and a narrowing of focus, the team behind the Ab doorbell concluded that burglary prevention, under the overall public concern of safety, would be a unique and relevant issue to address from the perspective of an insurance come.

Therefore, a proposition was initiative based on this theme: Ab, a home protection service that com-bines smart technology with preventive technology and post-burglary service and support.

Along the development process, the team discovered that the police, fire department and municipalities were more than willing to share their knowledge and insights. This was very inspiring, because communities become safer places when residents collaborate. Collaboration therefore became an important element of the proposition.

What also became evident along the way was that test-customers of the Ab concept greatly appreciated and benefited from the personal approach offered by the technicians and support team – sending a box of sensors and instructions does not increase people’s sense of safety, however providing them with an already installed package and personal burglary prevention tips does

Ab concept pilot projects were initiated in several areas, including those in which burglaries are quite common. Participants who had experienced previously burglary attempts were also quite keen to take part in the pilot. One such participant, Paul, credits the Ab concept to preventing a burglary in his home:

Paul: 'We away for the weekend when my wife was woken in the middle of the night by a motion alert on her mobile phone, coming from the camera at our front door. Motion at the front door at night is odd, so we immediately watched the live connection to see what was going on. Someone was tampering with our front door. We called the alarm numbers and the police arrived at our house within five minutes. At first, they were unable to find anything at our front and back doors, but we insisted they check the front door carefully. They found a snippet of paper inserted next to the door. Burglars use snippets to check whether people are at home.'

The footage collected by the sensors and video were used to raise awareness and alert in Paul’s neigh-bourhood, as well as give police some substantial evidence. As was seen in the video, the potential burglar did not appear to be wearing gloves, and the fingerprints were very valuable for the police investigation.

Safety is a basic need

The Ab concept aims at fulfilling one of society’s most basic but most important needs – safety. As more people start to use the technology and service, we hope this has a positive impact on the security of people and belongings as well as instill greater peace of mind.