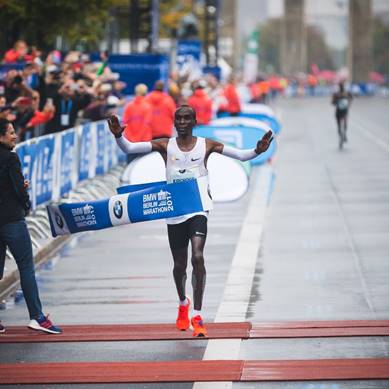 NN Running Team athletes will be among the runners at the 2018 Berlin Marathon on Sunday, 16 September. One of the favourites to win is Olympic and two-time Berlin marathon champion Eliud Kipchoge of Kenya.

Eliud is the world’s pre-eminent marathon runner. He aims to build on his record of nine wins from ten career marathons as he seeks to defend his Berlin marathon crown. He has spoken publicly of his desire to lower his marathon personal best of 2:03:05 – just 8 seconds shy of the current world record mark. Competing on the world’s fastest course gives him every opportunity to achieve his target as he seeks a third victory in Berlin.

Eliud is joined in the German capital city by his NN Running Team colleague Abera Kuma. The 27-year-old Ethiopian raced to a personal best of 2:05:50 for second in the 2018 NN Marathon Rotterdam and he will be hoping to make his mark.

We wish the NN Running Team athletes and all runners the best of luck in reaching their personal goals at the Berlin Marathon!

The NN Running Team will look to make their mark in the concluding Marathon Major of 2018. Defending New York City Marathon champion Geoffrey Kamworor returns in a bid to become the first man in 20 years to record victories in successive years.

Follow the NN Running team’s social channels and www.nnrunningteam.com to stay up to date with the athletes and their races.