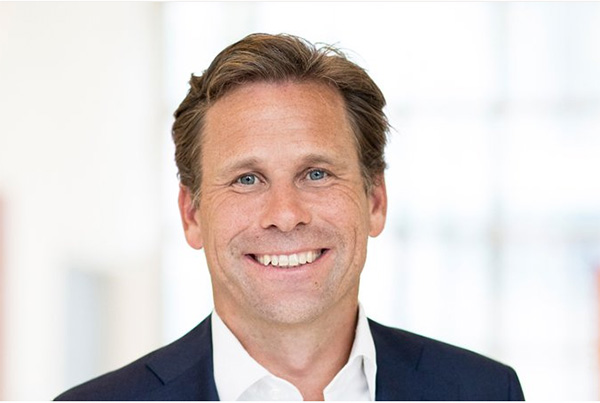 David Knibbe, CEO NN Group, was recently interviewed by Topvrouwen.nl on his approach to diversity, his personal experiences and the targets set by NN at our recent capital Markets Day. Read a translation of the interview

‘A job interview? Be sure to stay on your toes’

From a young age, David Knibbe learned the importance of inclusion and ‘taking part’. Now, as CEO of NN Group, he is setting ambitious diversity targets: women in 40% of senior management positions by 2023. Knibbe talks with Topvrouwen.nl about the benefit of targets, about why financial services providers shouldn’t talk only about money, and about an extremely informative job interview. ‘I seem to have pressed all the wrong buttons.’

‘A bit uncomfortable.’ That’s how NN Group CEO David Knibbe described his feelings when he took to the podium on 10 September 2018 to sign the #Equality 2020 manifesto during the annual Topvrouwen.nl event at the Rijksmuseum . With the press of a button, Finance Minister Wopke Hoekstra was the first to sign the initiative that delivered a powerful contribution to the debate about gender diversity. Then Jolanda Lamse (PwC) and Knibbe (CEO of Nationale-Nederlanden at the time) took their turns signing. Both directors with a keen eye for equal opportunities for the top men and women in the field. ‘As a provider of pensions and insurance policies, you’re at the heart of society and you want the organisation to reflect that. That’s the signal I always wanted to give, to encourage others to get to work on this theme.’

In that sense, Knibbe was keen to take to the podium. But on the other hand, he thought that he needed to be modest, and that is where the discomfort set in. ‘Shortly before then, in 2017, we had started the integration of NN and Delta Lloyd. At the time, we opted to reappoint all our senior management. This enabled us to take a big step forward in the area of diversity. It’s an opportunity that other businesses that are also doing their best to achieve a better male/female balance don’t automatically have.’ Knibbe wanted to be clear about where these results – from 20% women in 2016 to 32% in 2017 – came from, and to show that it wouldn’t be possible to repeat such a feat every year. ‘I’m really happy with the way that we subsequently grew this percentage gradually: in 2019, we were at 36%.’

Gradual growth is the exact course that Knibbe wants to continue now. During the Capital Markets Day that NN Group held in June, he introduced his strategy for the future. The strategy essentially comes down to sensible, long-term growth – an ambition that is definitely not a blueprint for the financial sector as a whole. ‘We want to be a business that serves all of our stakeholders, and that means not only announcing shareholder targets for growth and capital, but also targets that lead to good customer scores, being a good employer, and social issues such as responsible investment, CO2-neutral goals, donations and commitment from volunteers.’

A target for more women fits seamlessly here. ‘In 2023, we want 40% of our senior management positions to be held by women – we’re talking about the Management Board and the levels just below.’ Knibbe wants to place an immediate caveat to this ambitious figure. ‘Of course, it’s important to announce this kind of ambition, including to your shareholders. But just setting targets is not enough. What you’re focusing on internally, what you’re rewarding and promoting are more important. In America, they say: “what makes you a hero?” Just talking about the result you want certainly doesn’t make you a hero. Your actions and behaviour are much more important.’

A quick fix is the easiest route to applause, but that is not what Knibbe is after. ‘I prefer internal growth in diversity as opposed to recruiting women from outside for senior positions. Developing internal female talent is a more substantial approach, which I believe is more enduring. It’s exciting though: not everyone changes jobs every year, so you sometimes need to appoint people to specific roles. Of course, you want to pick the best candidate for the job every time, irrespective of gender. That’s why it’s also so incredibly important to have a balanced talent pipeline.’

And then there’s the importance that Knibbe attaches to behaviour. ‘At NN Group, the conversation quickly turns to financial performance. That’s part of it, of course. But if you only talk about money, you’re sending the implicit message that that’s the only important issue. That’s why we deliberately focus a lot on other variables, and as a Management Board, we promote the idea that just talking about an ambition is not enough to become more diverse. We actively focus on, and think about, the signals we send. That stems from the underlying belief that achieving diversity – both in terms of gender and in a wider sense – has a positive impact on our organisation’s performance.’

A personal due diligence

Knibbe’s belief in the value and necessity of diversity is closely related to his life. A child of two engineers, both with a degree from Wageningen University, he was born in the Tunisian capital of Tunis. ‘My parents worked in development cooperation. So discussions about wide-ranging societal issues were very normal at the dinner table. We were taught that listening to others was important, and discussed ways to include others. Basically, it’s what we now call “stakeholder management”. I was brought up with the idea that men and women are totally equal – my mother has always worked and my sister is a professor.’

Knibbe has two daughters, and he envisions a society that embraces equality in the same way his family did. His approach to choices about work and home is therefore perhaps slightly different from the average director: Knibbe is very committed to a good work/life balance. ‘Yes, of course. That balance is also important for men. That’s why, long before the introduction of six weeks’ paternity leave this summer, we already had four weeks of paternity leave in our Collective Labour Agreement. That’s how you create the foundations for the equal allocation of caring responsibilities at home. Now that coronavirus has made working from home increasingly normal, I also hope that it will become more normal for employees to make a contribution at home, for childcare and home support for carers.’ He involves his family closely in his career choices. ‘When I was given the opportunity  to take on the role of CEO, I really had to think about it carefully. I also wanted my wife and children to be comfortable with my decision.’

Having doubts, not saying ‘yes’ straight away, asking questions and examining whether a tough job can be combined with the other important things in life: for women that’s often normal. Their critical questions, which are often mistaken as a disguised ‘no’, can also be interpreted as a thorough, personal due diligence. Knibbe can identify with that. ‘Well, I really want to be sure that a role suits me and that I’m making the right decision. So far, I haven’t regretted it for a second and I really feel at home here.’ But whether his willingness to undergo ‘self-reflection’ before taking up the role of CEO is a feminine quality? He laughs heartily at the question. ‘I don’t know whether it’s a specifically feminine quality. The fact is that I’m not that bothered about logical next steps in my career. More than anything, I want to do what I enjoy and what is sensible. Furthermore, if you enjoy something, you’re probably also good at it and you have the best chance of succeeding.’

Knibbe is open about the fact that intrinsic motivation to have equality at work doesn’t automatically protect you from the pitfalls that await you as you make a business more diverse. In some situations, you just need a bit of ‘help’ to see a candidate’s added value. He talks about a situation he experienced a few years ago when he – also new in a job – had a vacancy for a country manager. A female manager, who had been warmly recommended from several quarters, came in for an interview. ‘In all honesty, initially, I wasn’t terribly impressed by this candidate. The conversation was rather superficial and I rejected her. A colleague responded with: ‘You’re mad, she’s brilliant!’ But as the person responsible for the team, I wanted to be comfortable with my decision, so that didn’t convince me. It turned out that my boss felt the same way after he interviewed her. “If in doubt, don’t do it” is my motto – it was a really tough and important job. So, it remained a no. And I thought that was the end of it.’

But Knibbe’s view changed following an open question from a second colleague. ‘That colleague asked me whether it might be possible that two western men didn’t know how to talk to a woman from Eastern Europe.’ The comment was a bit hurtful and sowed a seed of doubt. ‘She advised me to invite the women for another interview and to ask someone I trusted, but who wouldn’t otherwise be part of the process, to join me. So I rang the woman up. Her response wasn’t very positive, and she basically said that she was no longer interested in the job. She did want to know, however, why I had initially rejected her. I responded by saying that the interview had gotten stuck on generalities, and that I couldn’t understand her vision. I encountered so much resistance through the telephone that I stopped the conversation and said that we needed to continue it face to face. Fortunately, she was willing to fly to the Netherlands again. It turned out that I had initially pressed all the wrong buttons, had not given her enough space, had not established a proper connection. It meant that she hadn’t felt comfortable enough to give her uncensored opinion. It was a brilliant second interview, and I took her on.’ Cheerfully: ‘Of course, I had to convince my boss, too.’

Knibbe learned a lot from that experience: ‘I still find that you need to be on your toes at interviews. I don’t want to generalise, but there’s often a difference between men and women in interview styles.’ Just take the tricky question of listing your strengths and weaknesses. ‘Men often don’t go any further than saying that they are a little bit impatient or they find themselves “perhaps a little too results-oriented.” It’s just nonsense that these are your only weaknesses.’ But then, the women. ‘Yes, they give you a more honest response, but at a certain stage, as the list grows longer and longer, I think: stop! “I haven’t fully developed this quality, this is new to me, I’ll need to catch up…” if you look at the difference through a purely male lens, you run the risk of always choosing a male candidate – after all, they come across as the “more suitable candidate”.’

A little coaching in this area is certainly not a bad idea. Knibbe is now involved with the Espresso link on the Topvrouwen.nl platform. Espresso is a tool that facilitates personal contact between senior women, senior executives and senior regulators. He’s already had four conversations. ‘During my career, I’ve also been able to have lots of conversations with experienced people who have helped me on my way. That had a big impact. I hope that I can offer that kind of help now, I want to give that to others, too.’