In 2017 NN Group, Nike and Global Sports Communication launched the NN Running Team, the first professional running team in the world. Now, five years later, we are celebrating the remarkable growth, achievement and development of the team.

In 2017 NN Group, Nike and Global Sports Communication launched the NN Running Team, the first professional running team in the world. Right from the start, the team’s successes have exceeded expectations. Now, five years later, we are celebrating the remarkable growth, achievement and development of the team. NN’s visibility as sponsor has been strong and the performance results are impressive, including World and European records, personal bests and Olympics medals. On this special anniversary, we are pleased to announce that the partnership has been extended until 2025.

The current contract was due to expire at the end of 2022 and has been renewed for a further three years, showing NN Group’s trust in the best team in the world. With the addition of INEOS and Abbott as partners and Nike’s continuous support the future of the NN Running Team looks bright.

Mariëlle Krouwel, Head of Branding NN Group: ‘We have been extremely impressed by the NN Running Team. The team's prestige and visibility has grown, partly due to the growing worldwide attention for athletics in general and marathons specifically. We are very proud to have been a trusted partner from the start of the NN Running Team. At NN we are a supporter of all runners, whether you want to break personal records in a road race or need support to start running your first kilometres. Whatever change runners are facing, they can count on our support. We are looking forward to the next three years, as we continue our successful partnership, and keep pushing together to change the face of the sport.’

Jos Hermens, CEO Global Sports Communication: ‘Something that started as a dream has developed over time and now inspires millions of runners and running fans all over the world. The team concept proves to be the perfect set-up for our athletes’ partners and has turned out to be a great platform to tell our stories. NN Group believed in us and our plans from the beginning and we’re delighted to announce the extension of this great partnership with our title sponsor NN Group.’

Among the team’s star athletes are Eliud Kipchoge, the marathon world record holder and the first man in history to run a sub-two-hour marathon; Kenenisa Bekele, the second fastest marathon runner in history and three-time Olympic champion; Joshua Cheptegei, the World 10,000m and Cross Country champion and current 5000m and 10,000m track world-record holderand Geoffrey Kamworor, the three-time World Half Marathon champion and two-time New York City Marathon winner. An exciting core of young women have also developed within the team, which is led by the current world record holder for 5,000 and 10,000 metres, Letesenbet Gidey from Ethiopia. The NN Running Team have also played a role in the organisation of many unforgettable endurance events in recent years, including the Nike Breaking2 Project, the INEOS 1:59 Challenge, NN Mission Marathon and the NN Valencia World Record Day. The NN Running Team will also be present at the upcoming NN Marathon in Rotterdam on 10 April 2022.

On Thursday 7 April the new contract was signed at the Nationale-Nederlanden Café in Rotterdam. 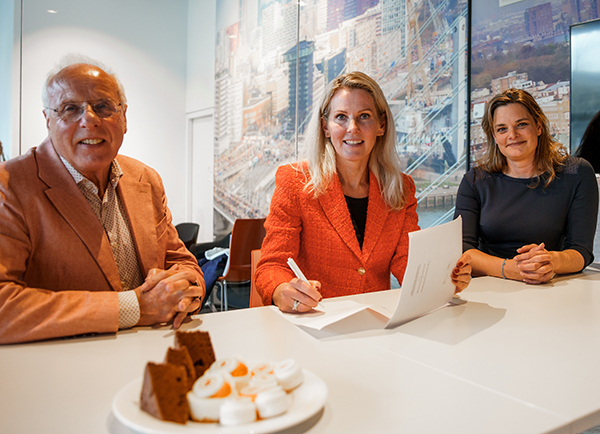 NN's sponsorship activities focus on running and arts & culture. As a supporter of all runners, NN is a sponsor of leading running events in the Netherlands, such as NN Rotterdam Marathon and NN CPC Loop The Hague, and helps runners achieve their sporting goals. By sponsoring the NN Running Team, NN Group is contributing to the further development of running as a sport. In the arts and culture sector, our main aim is to make art more accessible to a wide audience. NN is the main sponsor of the Mauritshuis in The Hague, and partner of the Nederlands Fotomuseum, the art fair Art Rotterdam and the Kunstmuseum Den Haag and the title sponsor of NN North Sea Jazz festival

All figures in this document are unaudited. Small differences are possible in the tables due to rounding. Certain of the statements contained herein are not historical facts, including, without limitation, certain statements made of future expectations and other forward-looking statements that are based on management’s current views and assumptions and involve known and unknown risks and uncertainties that could cause actual results, performance or events to differ materially from those expressed or implied in such statements. Actual results, performance or events may differ materially from those in such statements due to, without limitation: (1) changes in general economic conditions, in particular economic conditions in NN Group’s core markets, (2) changes in performance of financial markets, including developing markets, (3) consequences of a potential (partial) break-up of the euro or European Union countries leaving the European Union, (4) changes in the availability of, and costs associated with, sources of liquidity as well as conditions in the credit markets generally, (5) the frequency and severity of insured loss events, (6) changes affecting mortality and morbidity levels and trends, (7) changes affecting persistency levels, (8) changes affecting interest rate levels, (9) changes affecting currency exchange rates, (10) changes in investor, customer and policyholder behaviour, (11) changes in general competitive factors, (12) changes in laws and regulations and the interpretation and application thereof, (13) changes in the policies and actions of governments and/or regulatory authorities, (14) conclusions with regard to accounting assumptions and methodologies, (15) changes in ownership that could affect the future availability to NN Group of net operating loss, net capital and built-in loss carry forwards, (16) changes in credit and financial strength ratings, (17) NN Group’s ability to achieve projected operational synergies, (18) catastrophes and terrorist-related events, (19) adverse developments in legal and other proceedings and (20) the other risks and uncertainties contained in recent public disclosures made by NN Group.

This document does not constitute an offer to sell, or a solicitation of an offer to buy, any securities.