Life annuities in the 17th century

In 1671, the Dutch Raadpensionaris (prime minister) Johan de Witt wrote a book named ‘Waerdye van lyfrenten naer proportie van losrenten’ (The Worth of Life Annuities Compared to Redemption Bonds). This book was published in The Hague by Jacobus Scheltus. The ‘Waerdye’ is seen as the first mathematical approach to chance and probability. However, it took one hundred years until mortality rates in general were more widely used for such business.

In addition to being a brilliant politician, especially in financial terms, De Witt was a scientist. Along with Christiaan Huygens, a leading scientist at the time, and with Joannes Hudde (not only mayor of Amsterdam but also a mathematician), De Witt developed a way to benefit from annuities associated with life expectancy. With a mortality table, life expectancy by age-class could be derived.

In Dutch history Johan de Witt is remembered notably by his violent death in 1672. As prime minister of the Republic of the Seven United Provinces he was a key figure in Dutch politics in the roaring mid-17th century. De Witt and his brother were lynched by an organised mob in The Hague.

A predecessor of NN Group, the Nationale Levensverzekering-Bank, was one of the first to make use of actuarially calculated mortality rates and premiums.

NN’s historical collection contains a copy of the first edition of this influential work (there are three known editions). 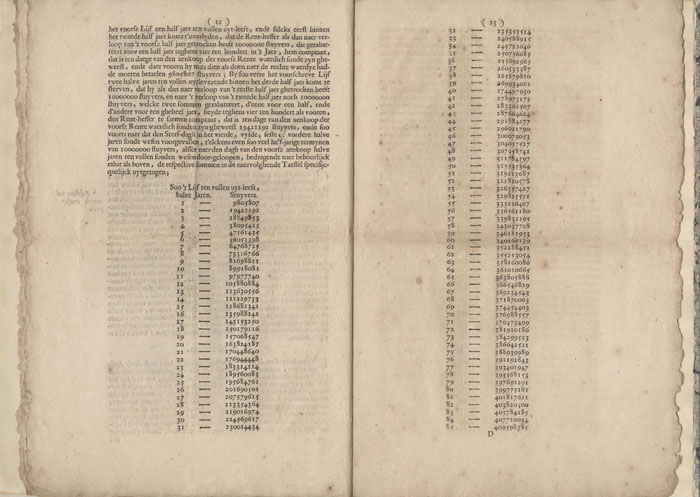