We can make blockchain a success if we work together 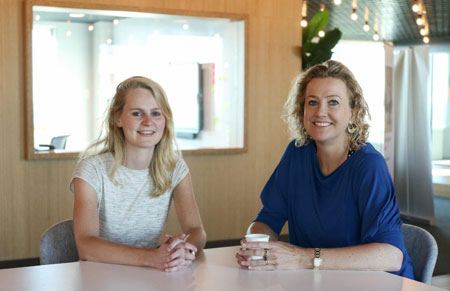 NN Group is one of the founders of the Dutch Blockchain Coalition. ‘There’s a lot of uncertainty about blockchain’, says Chief Innovation Officer (CIO) MarikenTannemaat. ‘But we do know that we can only make it a success if we work together.’

‘The Bridge’ in the Haagse Poort building is the physical link between the high-riseand low-rise buildings of NN Group’s head office. An arch across the Utrechtsebaan. It is also the meeting place for NN’s innovators. It is wherestaff from various disciplines get together to devise new products and services.

MarikenTannemaat and Anke Smilde are there regularly. Tannemaat is CIO, and Smilde isInnovation Lead at NN Group. One of the areas they are working on is blockchain. In the financial world, blockchain is afforded an almost mythical disruptive power, because transactions can be tracked decentrally and are readily accessible and verifiable without the need for a central manager. But, for the time being, the number of practical applications of the digital ledger for the wider public is limited to crypto currency.

NN Group is involved in developing practical applications in the Dutch Blockchain Coalition. The coalition is made up of companies from the financial sector, umbrella organisations, public authorities and educational institutions, among others. The collaboration is logical, says Tannemaat. ‘Blockchain can have a major effect on the public, but only if the private and public sectors work together. It is this form of collaboration alone that can guarantee success and security.’

Initially, NN took the classical approach to blockchain by looking at how the technology could be applied to its own services. Tannemaat: ‘Two or three years ago, we started a number of experiments. We came up with cases with a view to improving our own processes. We were looking at are as such as claim registration, a bitcoin fund, or illness reporting – all areas that could be made more efficient with blockchain. These were short-term projects lasting six or eight weeks in a controlled environment. We tried out lots of things, such as buying bicycles with bitcoin. Just to get an idea of what was possible. We soon realised that this wasn’t the right approach.’

‘The most interesting blockchain cases are not specifically about insurance, or about improving internal processes, but about digital identity’, says Smilde. ‘In alot of administrative processes, you interact with several parties, across corporate borders. It’s not about the technology or what we can do with it as an insurer or bank, but it’s about the benefits for the customer. It’s only when you work with other players that it becomes interesting for the wider public. That’s when blockchain can really become disruptive, even making processes in your own business ultimately redundant. The essence of blockchainis that it does away the middle man, but that doesn’t hold you back. More efficien tprocesses aren’t the central issue, but rather the consequence.’

Tannemaat:‘That’s an old-fashioned idea. Large companies are also constantly looking atways to make things better. I used to work for ING Direct, which was one of the most successful innovations in the financial sector. Instigated by a corporate. What you do have to deal with at a large existing company is regulation and legacy. The trick is to work on a project basis and then integrate the innovation into the business in a timely manner. Blockchain is one of our “Horizon 3” innovations: genuinely new business models that you shouldn’t mix with everyday business.’

Smilde:‘We’ve got a central innovation team and seven innovation labs in various countries. These are positioned directly under the divisions and are close to the business. We connect the labs so, that they can learn from each other. Colleagues from the business also take ideas to the smart labs. But forgenuinely new business models, you often need employees with a different profile. For blockchain, you need people with a technical background, such as mathematicians and physicists. The art is to connect them with the business again as soon as practical applications are possible.’

Tannemaat:‘For us, there are three steps to innovation: mindset, method and market space.The mindset is the most important element. You need to look at the world aroundyou, be open to new things. You then need to translate what you see back into the organisation. What can you do with it? You want to test out potential solutionson the market quickly. We work with ‘minimum viable products’. These products have not been fully developed, but rather just enough to test how customers respond to them. That’s where we are with blockchain, too. Which products respond to our customers’ future needs?’

Blockchain offers the benefits of a large central database, but that’s not what it is.

Smilde: ‘Atevery meeting about blockchain, there’s a clever person who says: “But we cando that with a database, can’t we?” The essential difference is that in acentral database, you give parties access to all the information in thedatabase, the DigID approach. A central database is privacy-sensitive andsusceptible to hacking. If a database like this is hacked, all the data entersthe public domain. Blockchain is decentralised and far better encrypted. Forexample, you only store the unique question and answer combinations – theattestations – that prove the authenticity of the document or transaction.’

‘To give you an example: in a mortgage request, you only need to know whether the applicant earns more than €40,000. The blockchain allows the consumer to give an answer to that question to the institution that wants the information (the bank) without his or her exact income or other information being shared by others. The blockchain doesn’t contain the data itself, only the authorised yes or no. This is of no interest to hackers, so is much more secure.’

‘A simple example is if a young person buys a crate of beer. He or she has to provide identification to make the purchase. The ID contains all kinds of information that is of no relevance to the seller: name and exact date of birth, for example. The only relevant information is whether or not the person is 18. The answer to the question can be provided perfectly in blockchain.’

But as an individual service provider, surely you can come up with some good applications? Why is collaboration so relevant?

Tannemaat: ‘You might choose to arrange things with a simple app that is based on blockchain. But then, everyone has to use the same app, or else it’s not very helpful to the user. So you need to collaborate.’

How are you approaching blockchain innovation?

Tannemaat: ‘We work with use cases. How can you apply the technology effectively? One ofthe ways we do this is with mortgage applications, where as a consumer you deal with lots of bodies. You need salary and address details. The applicant needs to collect all that information, make copies, scan them in. This is where blockchain comes into its own, but only if all the parties work together. This is because you want to work with one standard. That’s the problem with blockchain at the moment – we don’t have a standard.’

What is the aim of the Blockchain Coalition?

Tannemaat: ‘In the Netherlands, we want to lead the way with blockchain. Our approach is unique in the world. Everybody is involved. We’re discussing with trainers how they can train people in this technology. We are talking with lawyers (the State Attorney is involved) about what is and isn’t permitted by law. We’re working with APG’s Brightlands. It really is about consensus. Fantastic, isn’t it? We want to position NN Group in this technology, which is why we’re also one of the founders of the coalition. We can also learn a lot by working together.’

Smilde: ‘Myjob is different from what I could have possibly imagined a couple of years ago. I have weekly meetings in Delft with top developers, and innovators from institutions and other companies. Our discussions are very open.’

What applications do you envisage for the pension and insurance business?

Smilde: ‘Countless, as identity is crucial for insurers and pension funds. You can useblockchain to combat fraud, for example. In theory, it’s easy to tackle a lotof income protection insurance fraud, because it relates to companies orindividuals taking out insurance policies with several insurers. That’s not logical and often an indication of fraud. It’s not feasible or desirable to store all that information in a central database. But using blockchain, you can simply ask whether a person has an insurance policy else where.’

Tannemaat: ‘Refugees find it difficult to take out insurance because they don’t have a passport. If you can establish their digital identity using blockchain, they can get insurance without the need for a passport.’

If everything is so promising, why are there no other large-scale applicationsapart from bitcoin and other cryptocurrency?

Tannemaat: ‘Blockchain has a lot of hype, but it’s unruly in practice. There are still lots of issues. One problem is anonymity. You don’t know who is behind the blockchain. That’s the strength of bitcoin: nobody’s in charge. But in the financial world, you want to know who is allowed in the blockchain. You need a standard for this, and it needs to be a common standard. There is currently no regulation at all, and let’s not forget, blockchain already exists. Cryptocurrency is part of the economy.’

What does NN Group do with cryptocurrency?

Tannemaat: ‘We’re not doing anything with bitcoin. There’s too much volatility and it’s too anonymous. At one stage, we did consider the NN coin, but we didn’t develop it any further. It’s not about the coin for us, but the technology behind it. I follow bitcoin and I’ve got some myself. We’re monitoring cryptocurrency developments, but for the time being, we’re focussing on identity.’

For the consumer, the blockchain is far-removed. Reports about rapidly rising and falling bitcoin value, and loss because of theft or computer crashes, are unsettling for people. How can you overcome that mistrust?

Tannemaat: ‘Blockchain’s success is connected with acceptance by the consumer. Blockchain is an unbelievably complex issue, a bit scary even. That can be a barrier to applications, but it doesn’t have to be. We all use the internet without knowing exactly how it works. And actuaries don’t have to constantly explain how their models work to do a useful job. But it’s clear: in addition to people who are developing workable applications, we also need smart people who can communicate the benefits of blockchain effectively. This is a multi-stepprocess and we need to involve the pubic gradually.’

The Dutch Blockchain Coalition (DBC) wants to build a safe and reliable digital blockchain infrastructure in the Netherlands aligned to the wishes of the users of the future. The focus of the coalition is on building robust foundations for blockchain. The action agenda has three maintopics:

1. Getting the technology to work

2. Developing the conditions for blockchain